Don’t Ask the Barber If You Need a Haircut 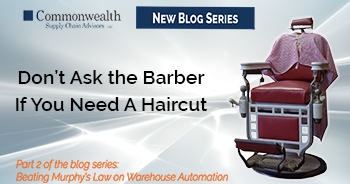 One key tactic for beating Murphy’s Law is the need for objective advice during the project concepting phase, the adage of “don’t ask the barber if you need a haircut.”

Why is Murphy’s Curve such a surprise to so many companies? In other words, why do organizations embark on projects with such unrealistic expectations for achieving rapid performance gains? The reasons likely differ in each case but being “over-sold” on a return-on-investment (ROI) projection by less-than-objective sources is often at the heart of the matter. Executives reviewing a business case for a capital project would do well to ask themselves whether those preparing the figures have any incentives to present an overly optimistic picture, either intentionally or unintentionally. It may be that the underlying business case was developed by an equipment provider who stands to benefit if the technology is adopted and who may chose to ignore the potential Murphy’s Curve of temporary productivity losses.

In another scenario, the business case may have been developed by company employees who may be desperate for the relief they believe the technology will provide, but too inexperienced to understand the trough of productivity that will inevitably occur before the benefits are realized. In either case, very few companies appear to account for “Murphy’s Curve” in any meaningful way during the project concepting phase. While some may acknowledge that there may be a learning curve associated with new technology, most seem to believe that the curve will be short and performance will never be worse than the present (pre-go-live) levels. Very few companies actually build-in an increase in operating expenses to the project budget to account for Murphy’s Curve. As a result, executives embark on the initiative with an inaccurate view of what could unfold.