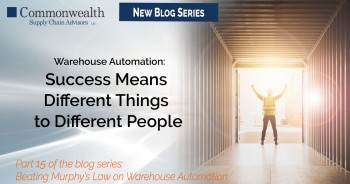 The old metaphor of “the operation was a success, but the patient died” is an apt analogy to describe how the definition of “success” may be different for the doctor than for the patient. The same principal can apply to warehouse automation projects. For companies installing new technology, their definition of a successful project likely involves enterprise-level measures, such as whether the company was able to ship orders faster, at a lower cost, and without interruption during the implementation. It may surprise these companies to learn that the vendor partners they are working with may not define success the same way. To an automation vendor, “success” may simply mean that the technology was able to perform a series of operations on a checklist after it was turned on. Like the physician in the earlier example, the technology vendor may be oblivious to the fact that the operation can still “die” even if the individual system components perform according to a specification.

Getting all project stakeholders aligned around a single definition of success early in the initiative can impress on all participants that they need to think in terms of how the technology will be able to improve the operation. When design engineers take off the blinders and begin connecting the functioning of the technology with the ways in which it is to be used, they can potentially suggest design improvements or be more alert to design flaws early in the project, to the benefit of all involved.