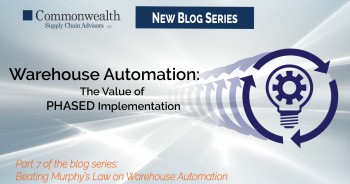 Depending on the nature of the design, it may be possible to implement project in phases, rather than all at once. This is especially true if the project involves relocation to a new distribution center. If there is more space available than is necessary on day-one, it may be possible to relocate the operation to the new building and initially begin filling orders using manual processes. Then, once the company has settled into the new site and new employees have been trained and are proficient, the more automated phases of the technology can be installed. Another way to deploy in phases involves installing all of the new technology but using more basic pick methodologies at first until the technology stabilizes and workers get familiar with new processes. For example, workers might initially only pick one order at a time before later transitioning into a more complex cluster picking process.

In either example, while some of the full benefits of the new technology may be slightly delayed, the risk of the organization choking on too much change, too fast, is greatly reduced.